You’ll find our blog to be a wealth of information, covering everything from local market statistics and home values to community happenings. That’s because we care about the community and want to help you find your place in it. Please reach out if you have any questions at all. We’d love to talk with you!

Solar Panel Considerations for Your Home 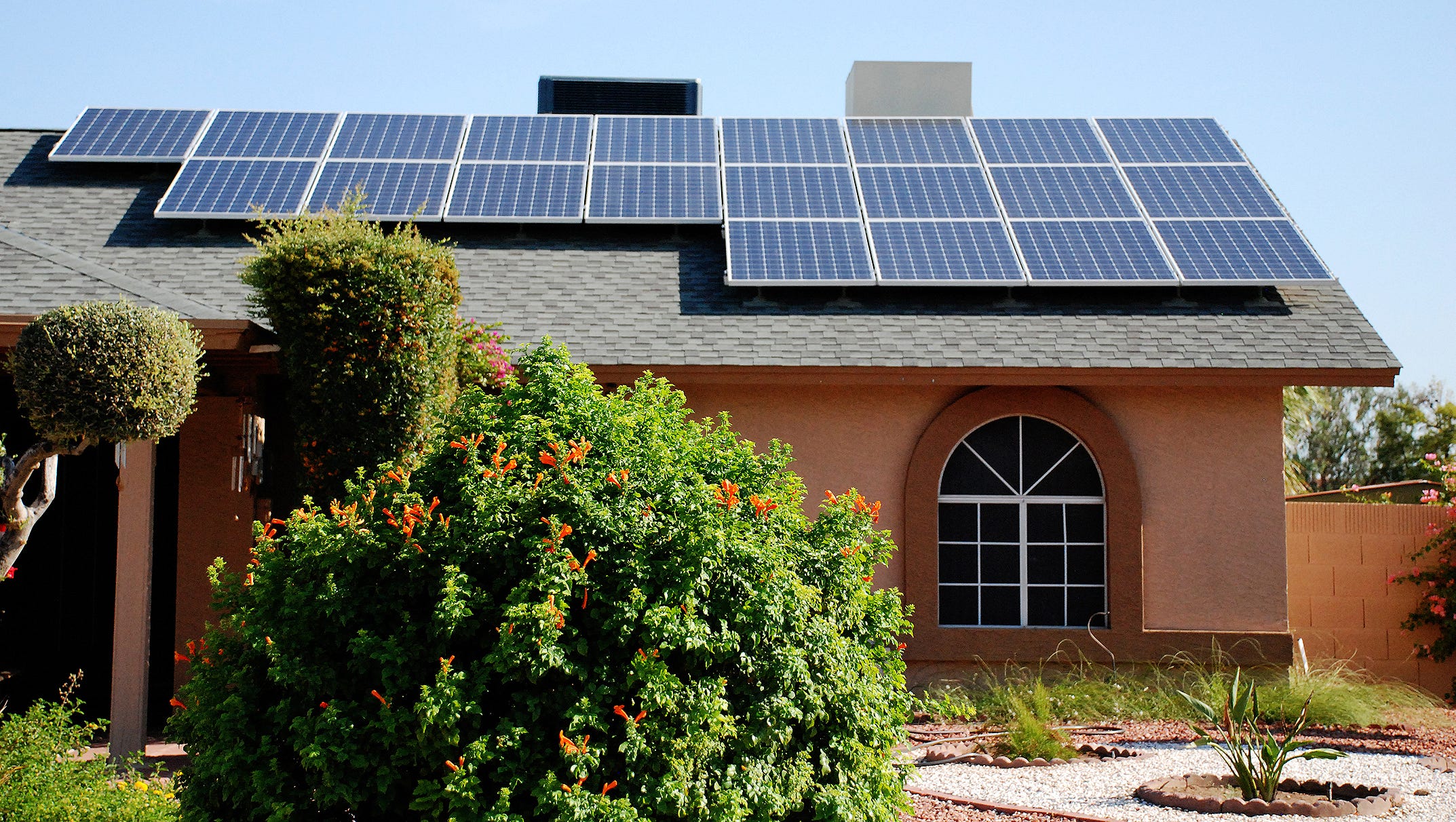 Increasing energy costs are spurring more homeowners to go solar, but all the choices in the market can make the decision daunting.

Solar power on residential homes has been heating up over the last 10 years, with a 50% average annual growth rate in the U.S., according to the Solar Energy Industries Association. This is due, in part, to the Solar Investment Tax Credit put in place in 2006 that now reimburses 26% of the cost for solar systems on residential and commercial properties.

As the market for solar power is increasing the field grows crowded with manufacturers and installers touting longer-lasting solar systems with greater efficiency and less cost, deciding which one to choose requires research. “The promises some companies make are wildly flowing,” cautions Madison, Conn.-based architect Duo Dickinson. Another caveat is the cost fluctuation of panels due to tariffs on imports, now at 18%. Though these are set to expire next February.

Here are some things home owners and buyers should consider when choosing components from various providers to make solar work.

1. Roof and house orientation. How much surface solar modules cover on a roof makes a difference in the amount of energy produced. Generally, they are placed facing south or west to be exposed to the most sunlight, optimizing power. Frequently, companies will try to cover 88% to 92% of a roof surface. Covering 100% may produce more power than occupants can use.

2. Panels. In recent years, panels have become more efficient, thinner, and better looking, thanks to monocrystalline designs that use a single photovoltaic cell rather than several cells that the older polycrystalline designs relied on. As a result, the updated panels can occupy less roof space because they pack in more power.

The number of panels installed is generally based on the amount of electricity occupants use, which is why an installer often asks for 12 months of electric bills.

What this means for a homeowner who chooses a newer 400W panel, for example, versus older 370W panel, is that they may only need to install 38 panels instead of 41 and save about 33 square feet of roof space. And because the 400W panel is more efficient, it will generate more electricity.

Installers also need to know local ordinances. For example, Evanston, Ill., doesn’t allow panels to stick up past a roof’s ridge line or be visible from the street if the roof is flat. They also need to know local utility rules since some will buy back excess power. Rocky Mountain Power, which services most Utah customers, gives credit for excess energy.

3. Batteries. Extra energy can be stored in batteries. Different solar panel manufacturers prefer different battery companies. For example, Solaria buys batteries from Sonnen while many other companies use batteries from Tesla.

4. Installers. Installation costs have dropped as more installers have entered the niche and become more experienced. Besides the modules and batteries, homeowners who go solar need an inverter to hold panels, wiring in place, and a meter. Experts suggest homeowners ask installers which modules they use, the price of each panel, number needed, what they look like, how much shipping to the site will be, if permits are needed and if so, whose responsibility it is to obtain them.

5. Costs and return on investment. A typical panel system might run between $15,000 and $25,000, which includes ancillary equipment and labor. Yearly savings vary greatly depending on the utility and if it offers incentives. How much money is saved also depends on how a purchase is made. If someone pays out of pocket, it may take seven to 10 years for a payback, but if someone leases the system, the savings will be less per month, but the homeowner has no upfront investment.

One caveat relates to whether a solar system will increase a home’s value. One study from the U.S. Department of Energy’s Lawrence Berkeley National Laboratory found that the panels are viewed as upgrades and home buyers have been willing to pay a premium of about $15,000 for an average-sized solar system. Additionally, the homes sell faster than those without solar.

Posted in Buyers, Sellers
no comments yet 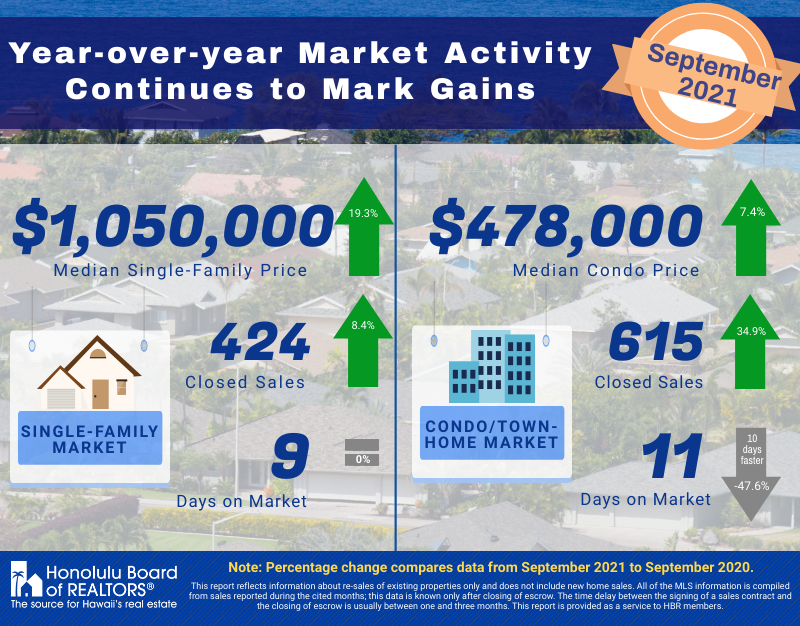 Closed sales of single-family homes and condos in September continued to outpace sales activity from the same time last year, recording 8.4% and 34.9% increases, respectively. That being said though, sales dropped slightly compared to August, with single-family homes down 0.2% and condos dipping 8.9%. The median price for a single-family home remained at $1,050,000, while the median condo price rose 7.4% year-over-year to $478,000.

Around 57% of single-family homes sold in September were priced at $1 million and above, and the most volume growth occurred in the $1,000,000 to $1,399,999 range, with more than double the sales as last September. Roughly two out of every three single-family homes sold last month closed above the original asking price. The practice of bidding over the asking price was most prevalent in the Ewa Plain region, representing more than 80% of the region’s third-quarter sales.

Sales of condo properties in the $700,000 and above price range more than doubled year-over-year with 129 closed sales compared to just 57 last September. Meanwhile, 39.6% of condos sold for more than the asking price in the third quarter, especially in the Central, Ewa Plain, and Makakilo regions. 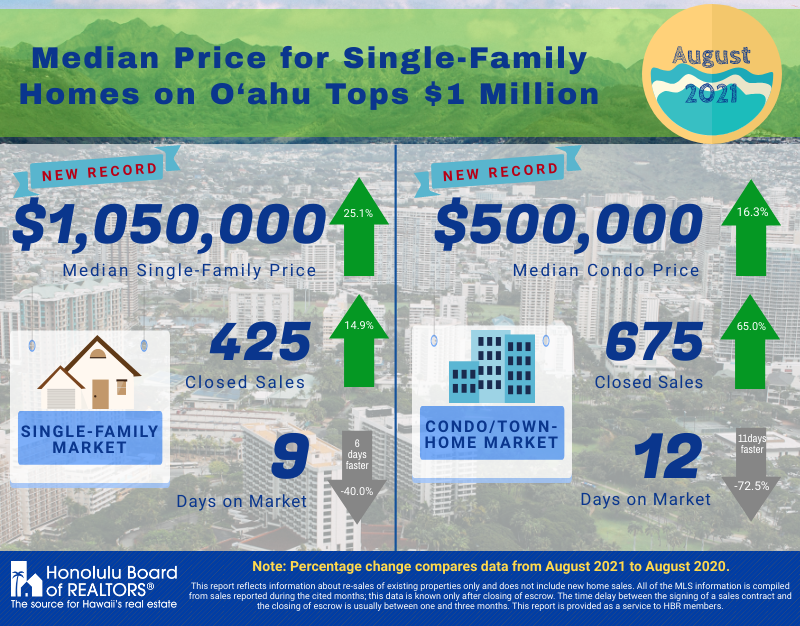 Wow! The Median Price for Single-Family Home on Oahu jumped up over $1,000,000 last month.

The $1,050,000 single-family median sales price is 25.1% higher than a year ago and up 5.8% above last month’s record. This is the fourth consecutive month single-family homes have set a record median, and except for April, a new record has been set each month this year. Sales jumped 14.9% compared to last August.

The condo market attracted buyers at all price points, with year-over-year condo sales rising 65% last month. The $500,000 condo median sales price is up 16.3% over last August.

The statistics in both single-family and condo markets followed similar trends with more new listings, low median days on market and increased offers over asking. 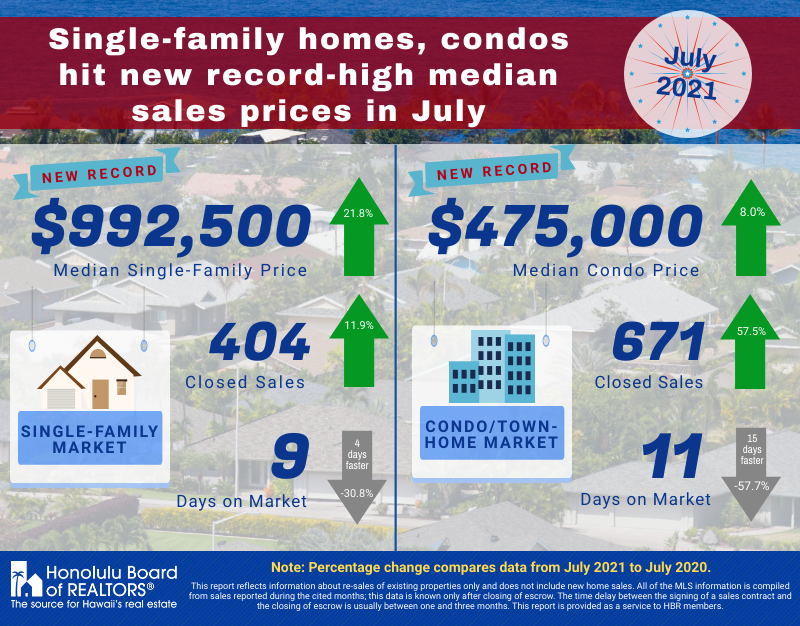 The new single-family home median sales price jumped up 21.8% compared to one year ago, while the condo median sales price rose 8.0% above last July’s median price. The new single-family home record ticked up slightly – 1.4% – above the previous record set just last month, while the new record price for condos was 2.9% higher than the previous record of $461,500 set in July 2019. 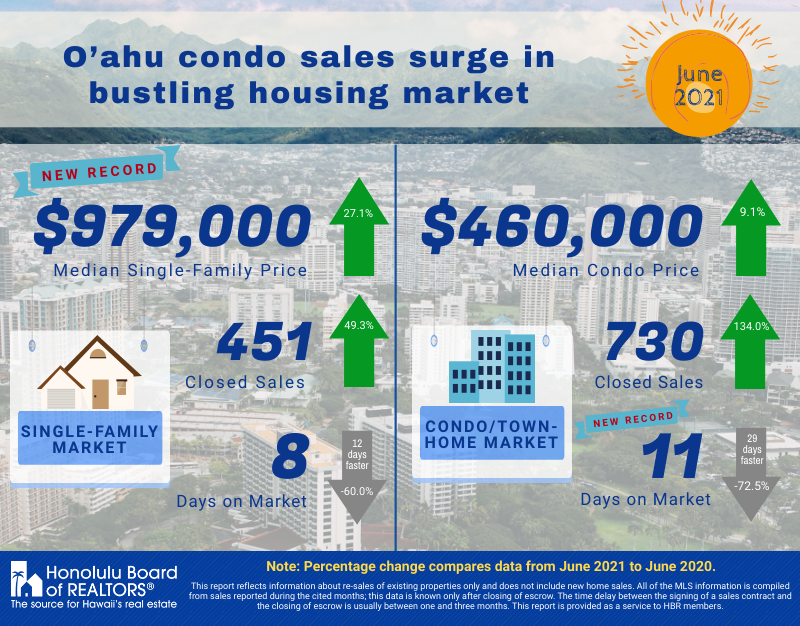 Once again Oahu home sales have set a record! Closed sales of single-family homes rose 49.3%, and condo sales skyrocketed 134.0% compared to June of last year when real estate activity first began to pick up following the economic standstill brought on by the pandemic. The median sales price of a single-family home edged past last month’s record to reach $979,000, while the condo median sales price of $460,000 was just shy of the standing record of $461,500 set in July 2019. The condo market continues to bustle with activity, setting a new record low days on the market at a median of just 11 days. Meanwhile, single-family homes continue to move into escrow quickly, spending a median of 8 days on the market. Sellers added much-needed inventory to the market, with June marking a 23.0% increase in new single-family home listings and a 31.1% increase in condo listings. So far, in 2021, the trend of properties selling over the asking price persists, with 57.7% of single-family homes and 32.9% of condos closing above the original asking price.

OAHU REAL ESTATE STATISTICS FOR MAY 2021 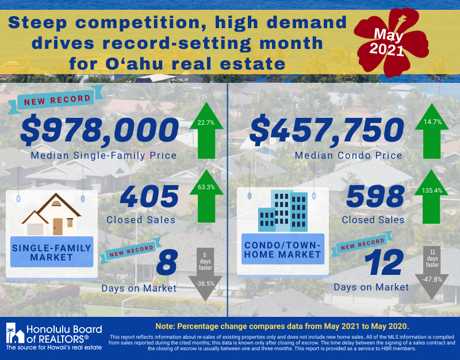 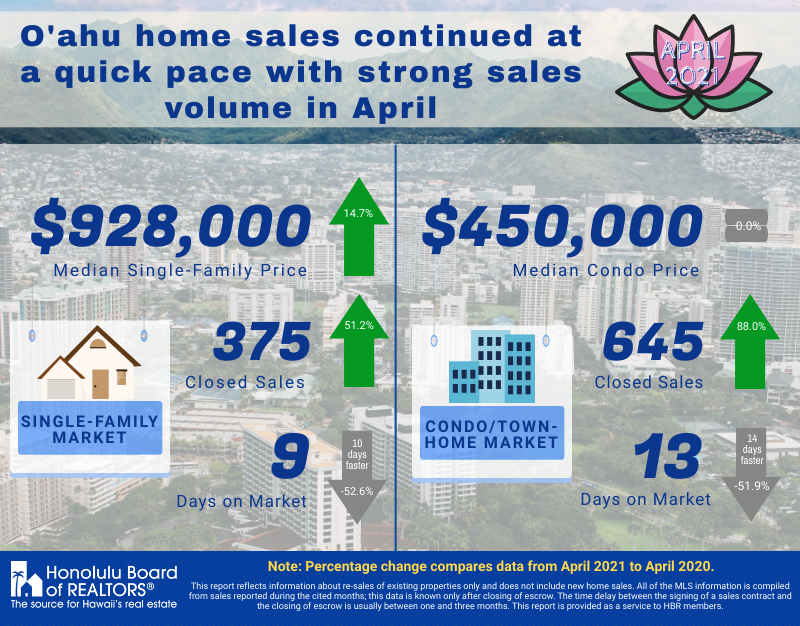 During April of this year, the Days on Market was about the same as in March. The average days on market for single-family homes was just 9 days, the same as in March, but 10 less than a year prior.  Condos/Town-homes, in a similar manner, were on the market for an average of 13 days which was only one day less than last month. We are still very much in a Seller’s Market with many listing receiving multiple offers and closing at a price above the listing price. 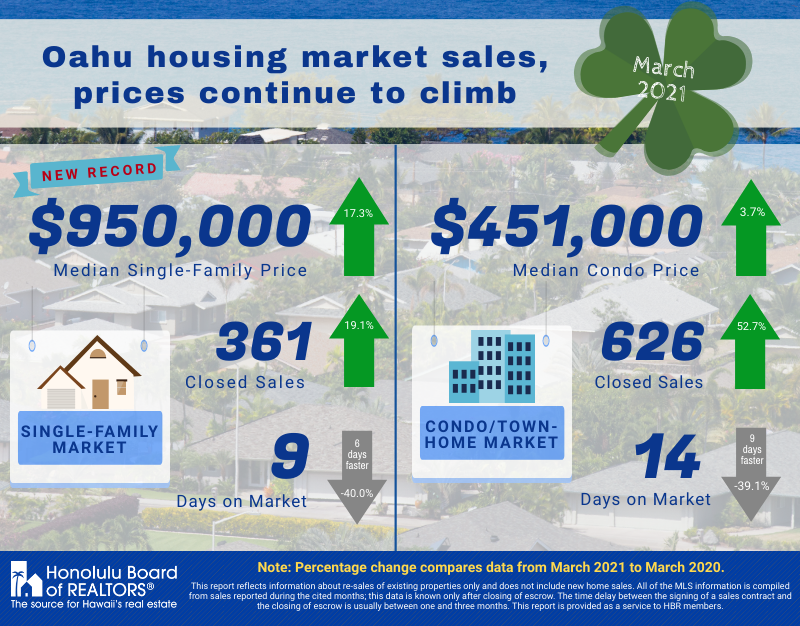 During March of this year, homes did not stay on the market for any length of time. The average days on market for single-family homes was just 9 days and this was 6 days less than in the same period last year, representing a reduction of 40% in the time on market.  Condos/Town-homes, in a similar manner, were on the market for an average of 14 days which was 9 days less than last year, which equaled out a reduction of 39.1%. 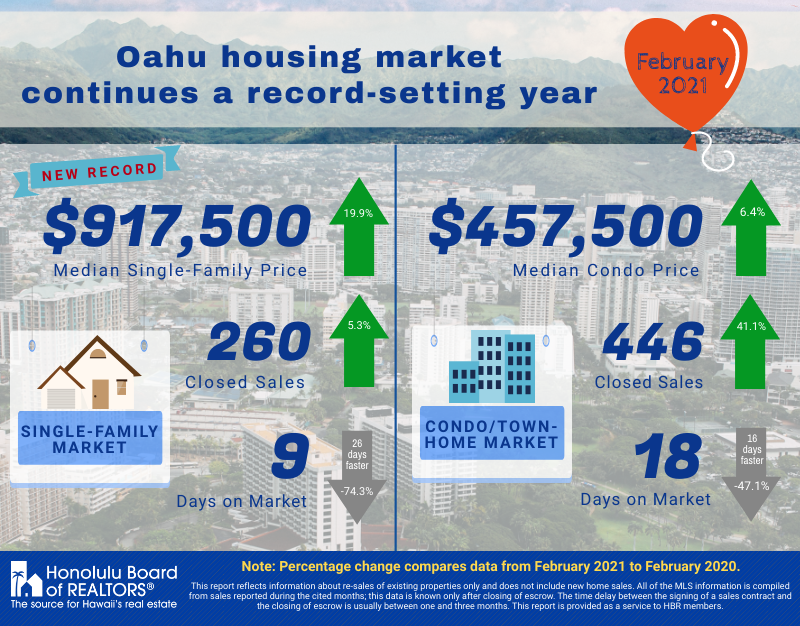 The Honolulu Board of Realtors has released the latest sales figures for homes on the Island of Oahu detailing the sales of Homes and Condos in February. There were 260 Single Family Homes sold, which was an increase of 5.3% over the the previous year. The sales of Condos / Townhomes increased by 41.1% over the previous year, with 446 sales.

It seems the challenge facing Realtors on the island right now, is finding a home for their Buyer clients to purchase. Inventory is tight.

Aloha. Larry here with Ola Properties, back with another segment of our top-rated schools on Oahu. Today we're going to talk about Admiral Chester W Nimitz Elementary School. So let's just jump right into the presentation here.

So as I say, it's the Admiral Chester W Nimitz Elementary School, more commonly known simply as Nimitz Elementary. And as you'll see from our list here, it is rated one of the top five public elementary schools on Oahu. And let's see, here's the school address at 520 Main Street in Honolulu. You can see the contact information for Ms. Marcy Kagami, the principal, as well as a link to their Facebook page. I believe this is the second school we've looked at that has a Facebook page, so you might want to check that out. The school serves grades PK through six and as of the writing of this, they had 706 students.

Looking at their academics, they have a student progress rating of 10 out of 10, and this rating measures how much students at the school have improved from one year to the next as compared to students with similar proficiency levels at other schools in the state. The students at this school are making far more academic progress, given where they were last year as compared to similar students.

Moving on to the equity part of the ratings, we see the equity overview rating is at nine out of 10, which shows that disadvantaged students are performing better than other students in the state, though this school may still have achievement gaps.

Then we'll look at the environment of the school. Here are the student demographics. The school is 49% white with 20% being Hispanic and 13% being black. Evenly matched as far as gender goes with male and female both at 50%.

And here you'll see the area served by Moanalua, or by Nimitz Elementary, made a mistake on that, obviously. It's around the airport area and over around some of the golf courses and military bases.

So that's our presentation. Now here's the disclaimer. Ola Properties and the author of presentation, Larry Oldfield, we are both real estate brokers. We are not school research specialists and we relied on greatschools.org for this information. Thank you. And if you have any questions, please feel free to contact us.